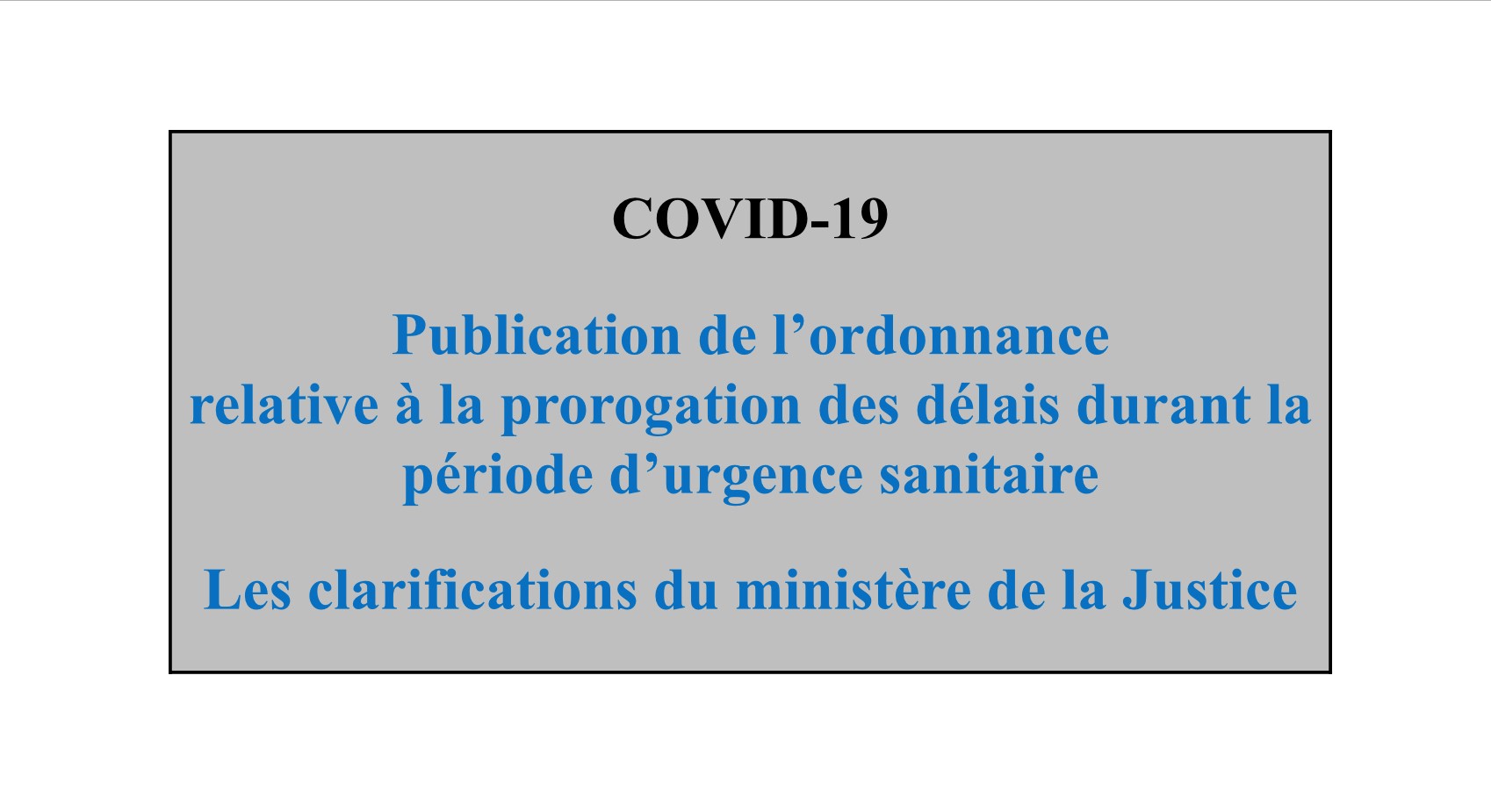 At the time when we were drafting our previous memorandum and were trying, in particular, to analyse the provisions of Article 2 of the Order on the extension of lapsed deadlines during the health emergency state (Order No. 2020-306 of 25 March 2020) and to understand its consequences on statute of limitation and debarment deadlines,

Mr Jean-François de Montgolfier (Head of Civil Affairs and Seals Directorate) sent a circular to all presidents of courts and public prosecutors in France (circular no. CIV/01/20, ref. no.  C2/DP/202030000318/CB), whose purpose is to provide clarifications on this Order. We would like to thank our colleague, Mr Sophien Ben Zaied (Bordeaux Bar), for sharing this document with us.

In particular, we will focus on Section 1 of this document, for it is the one specifically dealing with the rules extending deadlines that lapsed during the health emergency state.

For the record, in view of the lack of clarity in the Order on this subject, we wondered in our previous memorandum whether Article 2 of the Order had introduced a rule providing for the interruption or the suspension of deadlines. Indeed, the answer to such question will define the method for calculating the duration of the new period beginning at the end of the health emergency state. As nothing in the order allowed it, our opinion on this issue remained incomplete.

The above-mentioned circular remedies this by giving detailed explanations on the rules set out by Article 2 of the Order.

First of all, it explains that this article does not establish either an interruption nor a suspension: “the effect of Article 2 of the order is to prohibit that the steps taken/documents submitted within the new time limit may be regarded as late.” Actually, that’s the only thing we understood when reading the order! This being said, how is the “new set deadline” calculated? Nothing in the text of the order allowed to figure this out.

The explanation given the circular is as follows: “the steps taken/documents submitted may, by virtue of Article 2 of the order, be considered as lawfully carried out before the expiry of a new period equal to the period which was initially laid down by the law or regulation, which starts to run again from the end of the legally protected period defined in Article 1 (i.e. at the end of the period of a public health emergency state plus one month). ”.

One cannot help but notice that this rule bears a striking resemblance to that of the interruption of the statute of limitations in Article 2231 of the French Civil Code: a new period of the same duration as the interrupted one begins to run.

It is true, however, that this system differs just as fundamentally from that of the interruption of the statute of limitations in the French Civil Code insofar as the duration of the new period of limitation is limited to 2 months.

In short, the order confirms the first assumption that we contemplated in our previous memorandum: we are talking about a statute of limitations or debarment of the same duration as that which was interrupted during the state of health emergency, that will begin to run one month after the latter’s end, although this new period is limited to two months. Summary note: